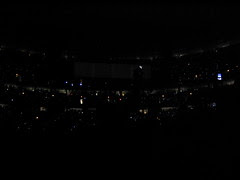 'turn this place into the milky way'
Originally uploaded by Brande Jackson.
Last two weeks have been insane - finished the Dave Matthews Band tour on a Sunday night, was on a plane to Toronto and opened up U2 the next day, flew back to LA the day after that, back to Toronto, quick run through Nashville with Coldplay, Chicago for U2, Minneapolis, Milwaukee, back to Chicago and a mad rush to get caught up on work (it doesn't happen) and now off to Atlanta to finish up Coldplay for the rst of this week. And a lot of craziness in between...myself and Josh, our official 'new guy', are looking forward to joining up with Aaron and Dan and having some impressive last few nights with Coldplay...more updates to come soon!
Posted by Brande at 10:58 PM No comments: 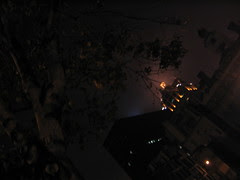 Downtown Milwaukee
Originally uploaded by Brande Jackson.
I had never been to Milwaukee before. We stayed at a lousy hotel by the airport, so really, I can't give an assessment of the city as a whole, but the fans at the show last night were great, and we found cool bars, so it gets and okay from me.

Heading on to Chicago today; I was going to fly home for a whirlwind 20 hours or so and try to get a bunch of stuff done, but I can't drag myself onto another plane. I have been on something like 10 planes in the last two weeks, I feel like Edward Norton in Fight Club, hotels, planes, cities are starting to blur...so, a few days of working in Chicago, then myself and Josh will join up with Aaron and Dan in Atlanta on Wed and finish up the Coldplay tour, while Carlos goes home to move since they are tearing down his house (long story...)
Posted by Brande at 6:14 PM No comments: 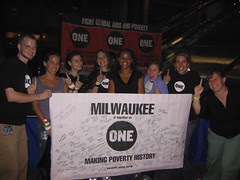 Milwaukee ONE Volunteer Crew
Originally uploaded by Brande Jackson.
Pictured is our amazing team of volunteers that helped us out at the Milwaukee U2 show - we got over 1500 people to join the ONE campaign last night, and generated a lot of support for the campaign in the 'Brew City'...
Posted by Brande at 6:09 PM 2 comments: 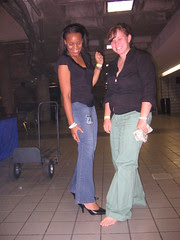 Footwear
Originally uploaded by Brande Jackson.
Volunteer Dora was the first volunteer we have ever had that managed to work an entire show wearing sizable heels, and was totally comfortale! She said she has climbed a mountain in heels before, which is pretty amazing. Meanwhile, DATA organizer Anne lost her shoes at some point while working behind one of our tables. Actually, her feet just really hurt, but I like to start rumors that she is a 'closet hippy'...
Posted by Brande at 6:08 PM No comments:

ONE goes to Milwaukee Wearing the white band
Originally uploaded by Brande Jackson.
Great night in Milwaukee last night - lots of support for the ONE Campaign and love for U2, as the band made its first stop there in 2005. We got over 2000 more white bands out into the world, got lots of people signed up for the campaing, AND we also discovered an awesome bar called Mel's that was bumpin' the hip hop classics.
Posted by Brande at 6:02 PM No comments: 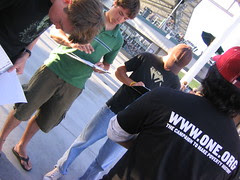 ONE Campaign at DMB
Originally uploaded by Brande Jackson.
Lokahi crews are still laboring on this Labor Day weekend - DMB has been on a run through the Southwest - with lucky Dan getting to hit Phoenix and Albuqurque TWICE in as many weeks, since he went through there the week before with Coldplay. Him and Mary are drummin' up lots of support in the Southwest for the ONE Campaign - they just hit Texas yesterday (the first time we have EVER done concert outreach in the Lone Star State - for whatever reason (fear, maybe? I can talk a little good natured trash on Texas 'cause my grandma is from there!) we just never seem to make it through there on any of our tours) - yesterday in Selma (I'm told it's near San Anton) was one of our best dates since the tour picked back up on the west coast, and early reports from Dallas are looking good as well. Sadly, our banner stand broke and we lost our dolly...anyone have any they want to donate?

Meanwhile, Carlos and Aaron, our newest Lokahi tour crew member, left Long Beach last Saturday morning in our 'splattered with bug death' touring truck, and somehow made it to Chicago by the following afternoon. I don't endorse this sort of insane traveling unless I am doing it myself, which I normally do, but I digress...they have since hit up Detroit, Columbus, Syracuse and are now in lovely New Jersey - our favorite state of them all - with our boys Coldplay, teaching people about Making Trade Fair and the ONE Campaign. Along the way, they caught the tail end of storms from Katrina, drove about 40 miles in the wrong direction at one point, and today found themselves lost enroute to the show, but were taken back to the Garden State Parkway by what Carlos described as 'the ultimate New Jersey dude on this massive glam Harley' who simply told the guys to 'just follow me back to the parkway already!' Sure enough, they made it to the venue with time to spare....

Meanwhile, I am still hanging and working from home in the LBC, getting everything in order before I head back out into the chaos I have created for my life known as "running-two-big-tours-and-starting-U2-next-week-all-at-once". When I leave my lovely abode for NYC on Tuesday, I probably won't be back for more than 24 hours until Christmas. But I get to tour with Coldplay, U2 and Dave Matthews, so I'm not complaining...


PS: be sure to try to make any sort of donation to help out hurricane victims. The American Cross does awesome work, consistently, and many of the NGO's that make up the ONE partnership are also providing relief, go here for info on who they are.
Thanks.
Posted by Brande at 6:16 PM 2 comments: