We normally don't have the interns push the rental car... 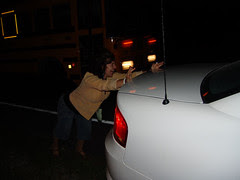 We normally don't have the interns push the rental car...
Originally uploaded by Brande Jackson.
...but we don't usually run out of gas either. Look how HAPPY Intern Haley is to push though - she later told us it was the highlight of her internship thus far, as they don't really have cars in the part of Texas she's from. Watch for profiles of all of our Lokahi summer interns to be posted soon!
Posted by Brande at 10:33 PM 3 comments: 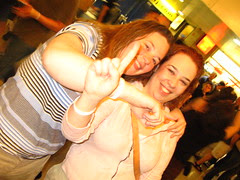 Pearl Jam fans wear the white band
Originally uploaded by Brande Jackson.
This past weekend in NJ was great ! These shows were our last few dates with Pearl Jam before they go on a break - watch for us to start up again in about two weeks, including dates with Tom Petty! - and we definately made the most of our time in the Garden State.

Cool to see the legacy of our outreach last year - lots of fans came by to tell us they joined with us or saw us at a U2 or DMB show last year, and that they were eager to stay involved. We had a LOT of people sign up to be a volunteer in the NYC/NJ area (and don't forget, if you want to do the same, just click here!) which is great - we love seeing ONE continue to grow the way that it is! 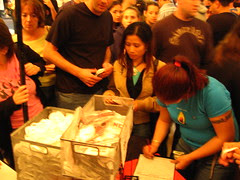 Pearl Jam fans sign up at the end of the night
Originally uploaded by Brande Jackson.
We had one of our strongest nights of the tour while in East Rutherford – PJ fans are really starting to become more and more interested in the campaign, and it seems that the word is spreading that we are taking part in the tour. 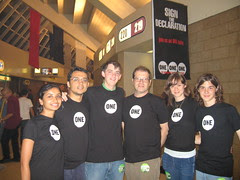 ONE Volunteers in NJ at PJ
Originally uploaded by Brande Jackson.
We had a lot of fun with our volunteers in Jersey, and I want to take a second to spot light this amazing team! First off, we had Bob who helps just about any time we are in the NJ/NYC vicinity – only he never seems to end up in any of our photos, so we were excited to capture him in action! Keith and Jeff both learned about the campaign as Oxfam Make Trade Fair campaigners - it was Keith’s first time volunteering and he pretty much blew us all away! Jeff, who is a junior in high school, had joined us at Warped Tour last summer, and after getting a ride to the venue from his dad, he rocked out, getting lots of and lots of people to sign up! We also had Mary and Enrique, both grad students at Columbia. Enrique is a friend of Mary’s, he called to see if he could join at the last minute (we were short on volunteers so it worked out perfect!) – he had never volunteered before, his bus dumped him at the Convention Center (a long way from the Continental Arena) so we expected him to be frazzled by the time he came in, and in the midst of the chaos and training we noticed he disappeared. We thought we lost Enrique, but as it turns out, he was ready to go and was already out there talking to PJ fans! Rounding out our crew was Matisse, who works for the organization Witness, which does some amazing human rights work.


A big thanks to all of our amazing volunteers for their help last night – again, the work we wouldn’t work if not for your ongoing support!
Posted by Brande at 10:20 AM No comments:

Back out with the Dave Matthews Band this summer! 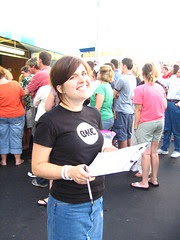 ONE Volunteer DMB Kansas City
Originally uploaded by Brande Jackson.
We are very proud to be taking the ONE Campaign back out with the Dave Matthews Band again this summer! DMB has been a big supporter of ONE - you can even see Dave in the ONE click video
- and we are very excited to get another chance to talk to the band's fans about the ONE Campaign.

Our second night of the tour - in Kansas City - was AMAZING! We got nearly 1,000 fans to join the campaign through the efforts of a small but mighty volunteer crew from the local Kansas City ONE Chapter.

Keeping check back for updates from myself, our DMB Tour Campaign Leader Josh and his crew of mighty interns!

And don't forget: if you are interested in this campaign, want to help and learn more, then we want you to VOLUNTEER!
Posted by Brande at 11:38 AM No comments: