Munich and Dussledorf and our German volunteers did not let us down, braving snow storms, cold weather and crazy transportation problems to join us! 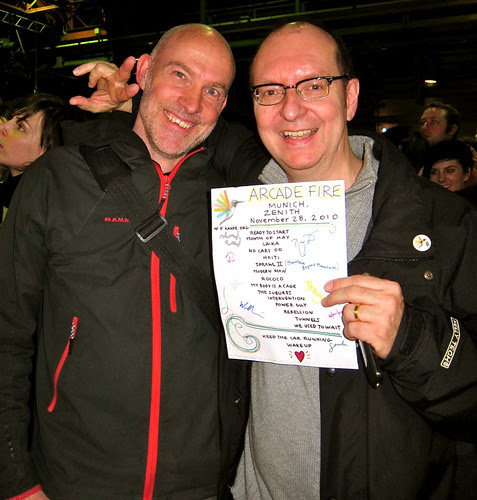 Our Munich show was similar in set up to our Lyon one - a former warehouse or factory of some sort, cool looking. Volunteer Team Munich included several students - philosophy, American Studies, graphic design and architecture, to name a few! - a former UN worker now getting his MA in Germany, a trade lawyer and a former PIH volunteer from the Neon Bible tour in 2007, something we LOVE to have happen! They worked like crazy, talking to hundreds of their peers in what quickly became a very cramped venue. 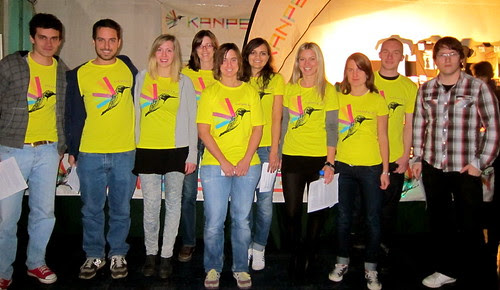 We rolled into Dussledorf the next day and quickly got to work setting up. Our volunteers all arrived ready to get to work talking to fans - so much so in fact that I never even got a big group photo of them all, they took off the second the doors open, eager to talk to people! Our team consisted of a lot of students, and another former volunteer from the last tour. They hit the ground running and never stopped, getting lots of support for Kanpe and PIH along the way. 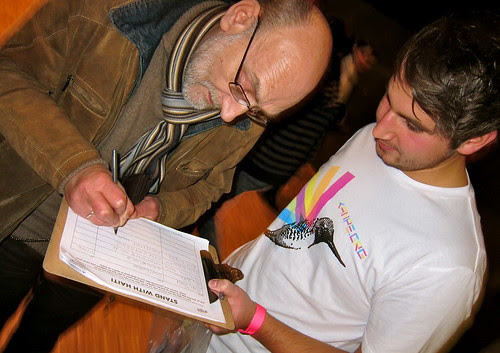 All in all Germany showed us a lot of support, with thousands of fans talking to our volunteers and signing our Stand with Haiti petition!
Posted by Brande at 8:15 PM No comments:

The Arcade Fire tour moved into France this past week, with dates in Marseille and Lyon.

We started out the week with only a handful of volunteers in Marseille; not sure entirely why, but I started to really work our social networks, and also asked the volunteers that had already signed up to help me in recruiting more people to join us. By show date, we had a full crew - I’m always so grateful for all of the work our volunteers do, esp when they rally together at the last minute for us, such as in this case! 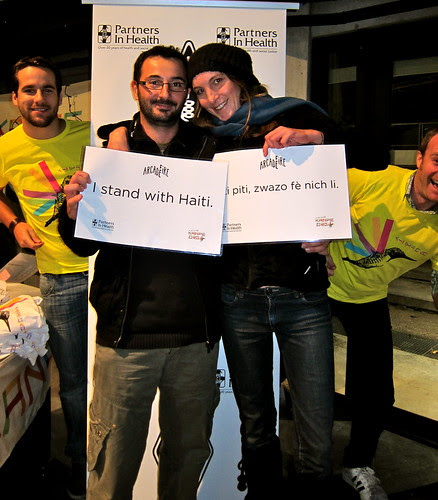 We were joined as always by a diverse crew, including a teacher, several students, two mobile app developers and a public health worker. The team did great, giving us our best night on the tour thus far! All night they talked to fans, really focusing on getting them excited and inspired by what Kanpe and PIH are doing. As with most of our trainings, Marika came out and joined us to talk about the band’s involvement and support for these campaigns - her help was especially appreciated at these two shows given her fluency (and my lack of) in French! Our volunteers have all for the most part been bi-lingual, so no big issues there, but it’s always great to have someone else on hand who can help with translations. Team Marseille did really great - they signed up almost 20% of the audience in attendance than night (a pretty impressive feat for ten people to accomplish!), which in turn means that they talked to and inspired hundreds of people!

After a day off (and a band/crew ‘Thanksgiving Dinner’ in France) we moved onto Lyon. The venue was really cool - I was told it was an old meatpacking warehouse. Team Lyon came in ready to work; I found them all gathered together ready to go at the meeting time, and I assumed most of them already knew each other since they were chatting away. As it would turn out, they just found each other, and were excited, and started to talking to one another outside in the cold - I always love to see teams form a bond like that at the get go, they were such a cute group! 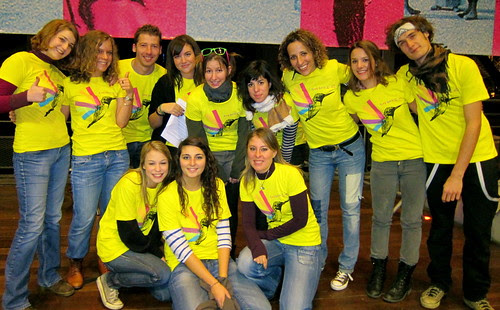 They worked like crazy too - it seems each show we do, the more people we end up talking to! They all stayed for a long time after the show ended as well, talking to fans for nearly an hour - it was a pretty crazy end of the night in Lyon!

The tour moves into Germany next, hoping it’s not too cold!
Posted by Brande at 1:11 PM No comments:

PIH and Kanpe in Spain with Arcade Fire!

The European leg of the Arcade Fire tour started up with two dates in Spain this past weekend, building support for Haiti, Kanpe, Partners in Health along with way!

Day one in Madrid: Palacio De Los Deportes sits in the middle of Madrid, flanked by a lovely plaza that quickly filled with fans lining up early to get a good spot on the floor. This was going to be a big show, nearly 15,000, and we were excited to get going! 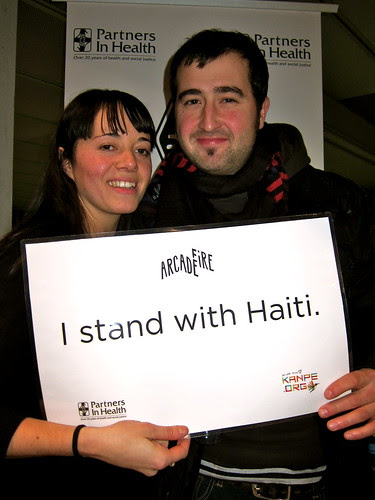 As always, we were joined with an amazing crew of volunteers. Several were students at an American University in Madrid - and a big thanks to Maya O’Cadiz for helping us to recruit for this first show! We were also joined by teachers, musicians, community members and business professionals - all committed to the idea of helping Haiti forge a prosperous future. After a brief talk from Marika on behalf of the band, the crew got to work practicing how they were going to explain the work of PIH and Kanpe to fans. Once the doors opened, they hit the ground running, having nearly 600 conversations about Haiti in just under two hours - very impressive! A big thanks to our Madrid team - Neil, Andreas, Joseph, Maya, Susan, Stephanie, Didier, Diarmuid, Leticia, Bruno, Stephen, Curry, Ray, and Madelyn - for getting our tour off to a great start! 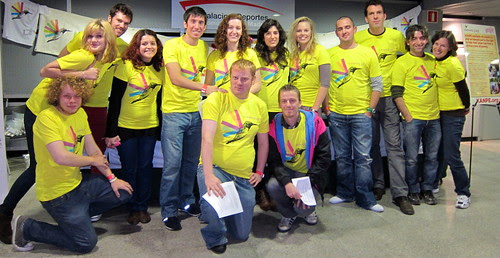 We arrive in Barcelona late - at least in tour terms! - the next morning. Palau Sant Jordi has an incredible view of the city and the sea from the top floor, where we were lucky to set up our Kanpe table! We were joined by a smaller but mighty crew of volunteers that night: Ines, Andrea, Patricia, Marina and Maribel who did a fantastic job and managed to talk to and inspire lots and lots of fans! It’s so exciting to see people really check out our set up, read about Kanpe and PIH and tell us about their own connection to Haiti or other parts of the world, or their desire to become engaged and involved. 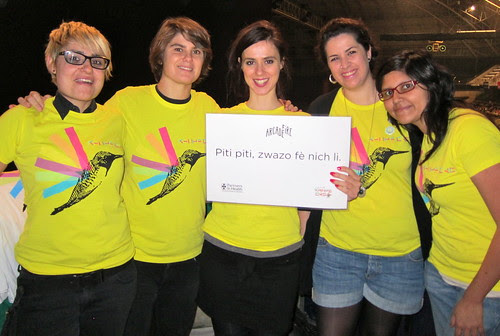 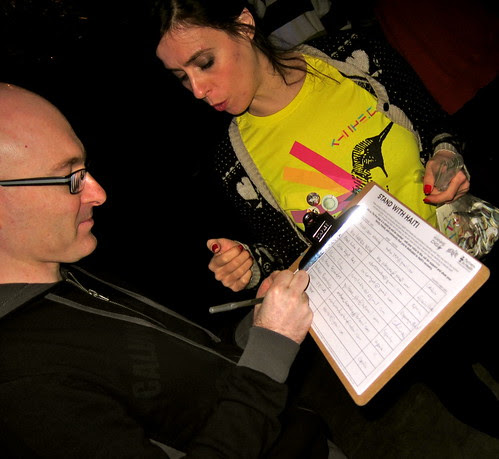 As an added bonus, Regine and the band are still writing out and autographing set lists every night to give away to PIH/Kanpe supporters as well! 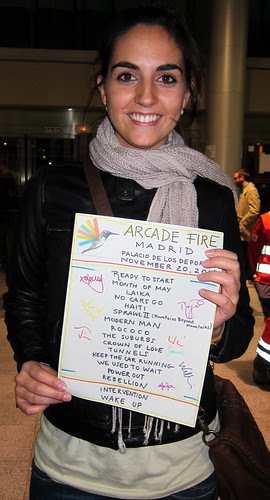 Our nights in Spain provided a great preview of the weeks to come as the tour moves into France, Germany, Ireland and the UK. We can’t wait to talk to and inspire fans across Europe about what they can do to support Haiti! 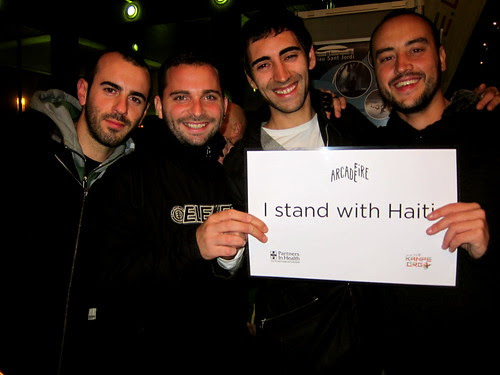 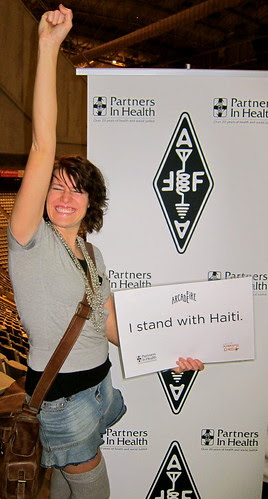 Posted by Brande at 4:41 AM No comments: 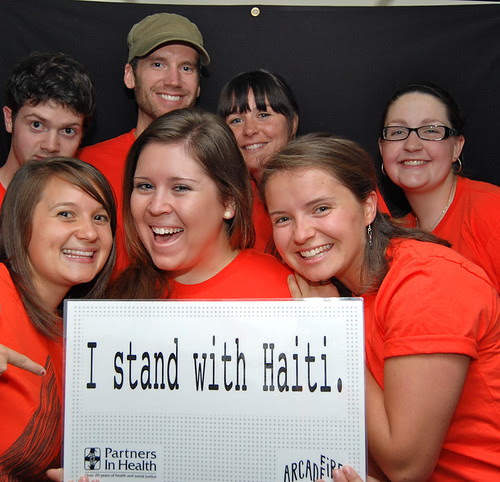 Update Nov 8th: All of the UK and Ireland shows are pretty much full at this point, but feel free to sign up to be added to a wait list. We DO still need more volunteers for our Spain, France and esp German shows - please forward this link on to anyone that you think would be interested. Thanks for the great response so far - we'll be in touch with all of you soon!

We are about to head back out with Arcade Fire, this time to the UK and Europe, continuing to build support for Haiti and the important work that Kanpe and Partners In Health are doing.

We need volunteers to join us to make it a success! Volunteering is an amazing opportunity - in a matter of hours, you can talk to hundreds of people about the incredible work these organizations are doing, inspire them, and get them involved. And yes, you might even get to see an awesome concert in exchange for your hard work!

We need volunteers in Nov and Dec in Spain, France, Germany, UK, and Ireland.

Sign up below, or visit our Arcade Fire volunteer page to learn more, and please pass this on to anyone you may know that would be interested in joining in and helping out!

Posted by Brande at 1:45 PM No comments: