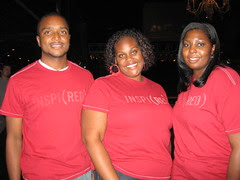 Common volunter crew Virgina Beach
Originally uploaded by Brande Jackson
Our team just wrapped up a whirlwind tour with Common that took us through the Midwest, southeast and northeast. In the process, we got thousands of fans educated and informed about Converse (RED) and the steps they could take to fight AIDS in Africa.

As always, we had amazing volunteers joining us along the way. We had Jennifer, a long time ONE Campaign supporter eager to also join us with (RED), help us in Orlando. In Virginia Beach, we were joined by what I coined my ‘Geico’ team – Andrew, Jamie and Shanaya, co-workers who knew each other from their job at, go figure, Geico Insurance. They were very into what (RED) was doing, and were a stellar volunteer crew, giving us one of our best nights on the tour! Jennifer and Mollie in Charlotte, whom volunteer for both (RED) and ONE, also helped us on another big night as well.

We were constantly amazed at how many people we met during this tour whom had been to and done work directly in Africa. I met a Berkelee Music student at the Worcester show who had just returned from Kenya, where she was doing music therapy with youth there. We met social workers in New York who had just returned from Nigeria. We met even more people who were in the process of planning volunteer trips – it was pretty incredible to meet so many people every night whom were doing amazing things day in and day out to fight poverty and AIDS in Africa.

A big thanks to Common and his team for bringing us out – we had a blast and can’t wait to catch up with the tour again next time it comes through the US! In the meantime, be sure to check out www.makeminered.com – design your own Chuck Taylor’s, and fight AIDS in Africa as well! 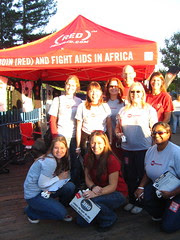 DMB Volunteer Crew in Mountain View, CA
Originally uploaded by Brande Jackson
It’s hard to believe that we already just wrapped a very successful third summer on tour with the Dave Matthews Band! Here’s a recap of our busy final week on the road:

Our team rolled in to Phoenix ready to work! One of our volunteers, Judy, joined us after having a root canal earlier in the morning – we think she wins the ‘hard core’ volunteer award of the summer! She has traveled to Kenya in the past and explained to us the level of crisis that people face there that she saw firsthand. She was very up to date on issues, and also works for Motorola, so is on the frontlines of the (RED) effort! Hassan joined us after only a few hours of sleep, and still had to go into work this evening at midnight. This didn't stop him from staying until the very end, even working the concourse while we were breaking down the booth! Anita and her husband John drove over an hour to volunteer with us, and were also very excited to be part of the campaign. We had a shorter night than normal in Phoenix, as we had to break down early to make it to California the next day, but that didn’t stop us from getting thousands of Dave fans involved with ONE and (RED)!

The next day we were in Orange County and were joined by another great team of volunteers. We were joined by Veronica, Debbie, Julie and my friend Kris, all of whom had come from all over Southern California to volunteer for the first time. Our team that night consisted of an ER nurse, a financial planner, an emergency dispatcher and entertainment lawyer – just goes to show you that our volunteer base is quite diverse! We had a lot of fun – Irvine is always one of our favorite shows.

We saw more people with (RED) gear than we normally do (and we normally see a lot of it!) including the very first ‘(RED) tattoos’ of the tour! We talked to lots of people who are active with (RED) and ONE in Southern California, and got tons of people new to the work involved as well.

Next up was San Diego. During set up, a certain bass player nearly wiped out on his skateboard in front of our booth, but luckily tragedy was averted and the show still went on! Our volunteers came out in full force: Thomas joined us for the second time in a week – he drove all the way to downtown LA from Camp Pendleton, where he is a Marine, to help at Global Mala the weekend before, so I had invited him to come back out to something that was at least a little closer. We were also joined by Lynniece and Cynthia, first time volunteers who did a great job. A big thanks to that team for staying around to help us break down at the end of the night as well! 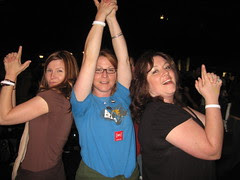 We were in the bay area the next day for the Mountain View show. We really like doing shows at the venue there – it has a great layout, the staff is super nice and it’s always cooler than other summer shows. We had a massive team join us tonight – 9 great volunteers that helped us get hundreds of DMB fans involved in making poverty history and fighting AIDS in Africa. Volunteer veteran Lori joined us again – it’s always great to see her! – along with Jamie, Dave, Raquel, Jean, Ginny, Deepika, Melanie and Trina. They were a super fun team to work with, asking great questions during our training and hitting the ground with full force once the doors opened. In particular, we were amazed by Melanie and Trina. They both had reported to work at 4:45am that day, and in fact barely made it to volunteer because they also finished work late, but they were somehow going full force ALL NIGHT – even staying long after the show ended, selling white ONE bands like crazy people. We discovered that their secret lie in the fact that they work for Starbucks and were sort of permanently caffeinated and peppy, which worked out great for us! They even helped us load our stuff out at the end of the night!

Los Angeles was were we finished up the tour. We had two great nights at the Hollywood Bowl, working with amazing volunteers yet again. We were joined by Drea, Megan, Carol and her son Chris on the first night, and on Sunday Beth, who had volunteered with us at a U2 show in Hawaii last year, joined us, along with Walt, Rachel, Jacqueline, Brooke and Amanda. Our crews did a great job at ending the tour on a high note, talking to thousands of fans over the two nights we were in town.

A big thanks to all of the volunteers and the DMB crew for their help this summer. Their hard work and support got tens of thousands of Dave fans involved with ONE and (RED). Keep on the lookout for more events soon!