Lokahi's After School Program is hard at work this fall... 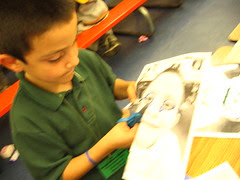 One of my students
Originally uploaded by Brande Jackson.
Hope everyone had a wonderful holiday!

Since I’m not teaching this week (or next!) I thought now would be a good time to mention the work Lokahi has been doing after school this fall. I’ve been teaching at Longfellow Elementary School in Pasadena the past several months, in addition to the other campaign and tour work I do. Lokahi has long been involved with the after school community – we’ve been working with the Pasadena Unified School District (under our after school program name of Turning Tables) for nearly five years now. Our curriculum specializes in project based learning that teaches our students about community service, global issues, and civics while also building their science, literary arts and artistic skills.

This past fall, I’ve partnered with my good friend Elizabeth Converse, and her program, California Living Histories, or ‘CLH’ as it’s known by our students! We’ve been introducing our students to art from all around the world, teaching them about lesser known artists that used their work to make a social statement, and in some cases, change the world. 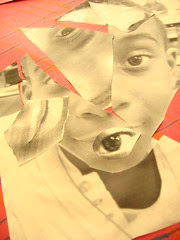 Student portrait
Originally uploaded by Brande Jackson.
I’ll be blogging more about our student art work in the upcoming weeks, as Lokahi starts to roll out it’s new curriculum. In the meantime, feel free to email us for more info on our after school program, and check out some of our photos of our students work and them in action!

Interesting article about poverty and philanthropy... 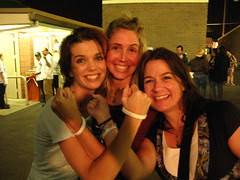 U2 fans and ONE supporters
Originally uploaded by Brande Jackson.
Check out this interesting article from last weeks New York Times magazine. A comment on the ONE.org blog mentioned it, definitely worth checking out - poses some interesting questions about wealth, poverty and philanthropy, as well as a fascinating history of philanthropy itself.

If you’re still looking for some places to make end of year donations, check out what some ONE Campaign partners are doing. Oxfam has a unique ’Oxfam unwrapped’ charity giving program this season, and Heifer International is always one of my favorite places to go for socially conscious gifts.

We Can Put Poverty in the Museums

" I believe that we can create a poverty-free world because poverty is not created by poor people. It has been created and sustained by the economic and social system that we have designed for ourselves; the institutions and concepts that make up that system; the policies that we pursue.

Poverty is created because we built our theoretical framework on assumptions which under-estimates human capacity, by designing concepts, which are too narrow (such as concept of business, credit- worthiness, entrepreneurship, employment) or developing institutions, which remain half-done (such as financial institutions, where poor are left out). Poverty is caused by the failure at the conceptual level, rather than any lack of capability on the part of people."

Check out the speech that this years Nobel Peace Prize winner, Muhammad Yunus recently gave upon accepting his award.

It’s interesting to feel the ‘cultural zeitgeist’ come to fruition, to read a speech from a Nobel Peace Prize winner that reflects what you yourself have been reading and thinking for years, assuming it would forever remain a pipe dream, a long lofty goal, and now all of this – this push to end poverty, to fight for equality, etc – is suddenly a part of the mainstream culture. (By the way, I’m in the midst of writing my comp exams for my MA in American Studies, so excuse the academic leanings today…)

In particular, being an entrepreneur that is very interested in the idea of creating businesses that focus on creating what I think of as an ‘equilibrium’ in their operations, (ie: the company does well, it produces a good that is of sustainable value to society, it treats those that work for and with it well, etc.) I found what Yunus had to saw about social entrepreneurship particularly interesting:

“By defining "entrepreneur" in a broader way we can change the character of capitalism radically, and solve many of the unresolved social and economic problems within the scope of the free market. Let us suppose an entrepreneur, instead of having a single source of motivation (such as, maximizing profit), now has two sources of motivation, which are mutually exclusive, but equally compelling—a) maximization of profit and b) doing good to people and the world.

Anyway, do check out his entire speech, it’s worth the read, and its reassuring to know that there is a world full of people like him, slowly working away to make things better

Video from the ONE booth in Hawaii

Check out the mini video that Lokahi's Arron took from the end of the night at the U2 show in Hawaii. You'll notice me running around with a bucket of white bands, and our hard working volunteers trying to talk to as many people as they can. It's not as chaotic as it normally gets post show - Arron couldn't have recorded it if it was! - but it gives you a good idea as to what it's like most evenings! I'll post more video from the last few years as we slowly upload it all to our You Tube page....

one campaign
U2
global poverty
activism
volunteering
Posted by Brande at 2:14 PM No comments:

Keep on rockin' in the free world... 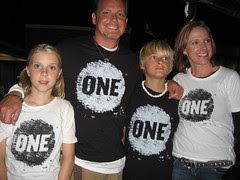 ONE family in their Edun ONE shirts!
Originally uploaded by Brande Jackson.

And with that, U2 ended a 130 plus date tour, 80 nights of which ONE had a big presence at! Initially it seemed strange to suddenly be back at a U2 show nearly a year after our last date in December 2005. But we quickly fell back into place, getting over 1800 more people to join ONE (and another 4000 texted to join as well!) and spreading the word about making poverty history across the Aloha state! Judging by the amount of people I saw wearing white bands across the island the next day, I could tell that our reach was pretty massive!

Getting to go to Hawaii was of course a nice perk, but even more fun was talking to so many fans from across the country and world who had come to Honolulu for this special show. As always, we had a stellar crew of volunteers to join us in making the night a big success. Among those volunteers were Beth and Susan, sisters from southern California who joined us. Susan is currently a nurse who now lives in Hawaii, and Beth had to wake up some three hours after the show to run in the AIDS marathon Sunday AM! LA volunteer Sheri was also there, along with her sister and two friends, ‘the other’ Sheri and Sean are ONE Hawaii members who are hosting an exciting event in Oahu later this week (contact us for more info on this!), Linsey and Laura work with the local Salvation Army, Riley is a Hawaii native, and Lori, a tried (or tired?) and true San Francisco volunteer rounded out our crew. It was especially great to see Lori – she was among the very first ONE volunteers we ever got to work with, way back in April of 05 when she joined us at a U2 show in San Jose. My buddy Jamie, a veteran volunteer at this point, and her husband James also joined us in helping out at the very busy booths - we don't think poor James really knew what he was getting himself into! In fact, the night was full of familiar faces from the last two years! 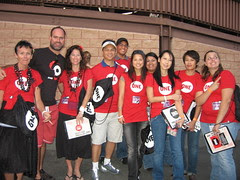 
If anything really stood out on Saturday night, it was the REDness of the crowd – there were countless fans sporting the new RED product tee’s, the ONE Edun tee’s (Bono himself was wearing the Edun ONE shirt most of the night!) and the black ONE tee’s. It’s hard for me to believe in that in March of 2005, when the tour began, there were only 50 or so ONE shirts in existence, (for my staff and our volunteers!) and now literally tens of thousands of fans are helping to fight poverty with their fashion choices! All in all, it’s been an amazing journey watching this campaign grow and expand and really make an impact over the past two years. 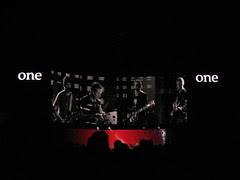 ONE
Originally uploaded by Brande Jackson.

It’s always bittersweet to have something that was as amazing as the U2 tour was for us come to an end, but it’s good to know that we got over 100,000 fans to join us in that time, and were able to take great strides in spreading the word about ONE. A special thanks to all of those volunteers that have joined us on the Vertigo tour, and to the Vertigo crew for the endless support of ONE!

Keep on the lookout for exciting volunteer opportunities to come in 2007!

one campaign
U2
global poverty
activism
volunteering
Posted by Brande at 8:04 PM No comments:

Okay, so our blog is sadly out of date 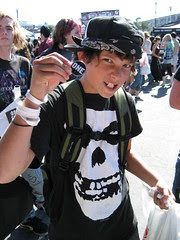 Fighting poverty IS punk rock!
Originally uploaded by Brande Jackson.
But a big backlog of updates will be posted soon, and then we can just act like this six month lapse in posting never happened, okay? It's been a busy second half of 2006: Pearl Jam, Warped Tour, Dave Matthews, a bunch of festivals, our after school program, an upcoming U2 show....excuses, excuses, but trust us, our updates will be worth the wait!
Posted by Brande at 8:08 PM No comments: