Already attending Outside Lands? Want to volunteer for Arcade Fire Haiti while you are there?

Once again we'll be taking the Arcade Fire Haiti Campaign out to a big music festival, and we are looking for some PIH, Kanpe and Haiti supporters who would like to volunteer a few hours of their weekend in exchange for some cool Arcade Fire merch!


This is a volunteer opportunity open to those who already have tickets to and are going to be attending Outside Lands.

Here is how it works: You sign up for 2 two hour 'shifts', learn about PIH and Kanpe, spend some time talking to your fellow Outside Land fans about the important work these organizations do, earn some good karma, AND get an AF Haiti tee-shirt, an AF poster and a chance to win an autographed AF set list all in exchange for your good will! 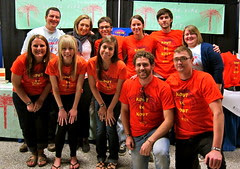 Getting involved is easy: sign up below, and we'll follow up with more info on Thursday. Hope to see you in SF!

Posted by Brande at 4:56 PM No comments:

Updates from the Brad Paisley tour!

The Brad Paisley H2O II tour has been going strong, and Water = Hope has had a lot of success along the way!

We’ve made stops in 14 different cities now, have talked to over 4,000 people about clean water issues and worked with close to 100 volunteers in the process. And we are well on our way with our fundraising goals, using our time on the road this summer to once again involve the country fan community in bringing clean water to communities in need. 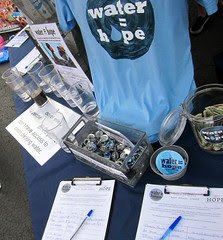 This past weekend we made two stops: Chicago and Columbus. Chicago saw our biggest volunteer crew yet, with 17 people joining us, some of whom drove from as far away as Milwaukee to be a part of the action. The team did great - it was our biggest night ever on the Paisley tour. 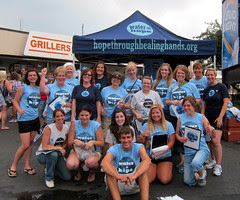 Columbus had smaller team, but they were very committed and ready to work! The torrential downpour of rain right when the doors opened didn’t even slow them down - they kept right on talking to people that had taken cover in some of the covered areas of the arena!

Our volunteers reflect the diversity of support that surrounds the clean water movement: last weekend alone with had students, retirees, non-profit executives, huge Brad Paisley fans, huge water.org fans, and a long time supporter of Senator Frist (co-founder of Water = Hope) among many others. It’s always exciting to see how issues such as this unite people in one common goal. 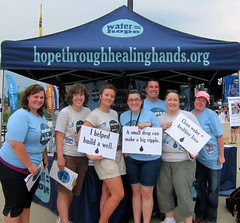 We are also pleased to see a lot of ‘return support’ on the tour itself; many fans have told us they supported the campaign last year, and are eager to do so again, buying a new shirt, signing up friends and family for more information, taking our info cards for classrooms, and so on.

We have five more stops ahead, Florida, Philly, DC and Raleigh. You can still sign up to volunteer, and if at one of the shows, be sure to stop by the Water = Hope tent to learn about how your support can enter you into a raffle to win an autographed Gibson guitar from Brad!

Posted by Brande at 3:32 PM No comments: