ONE goes to Daytona! 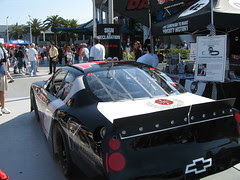 ONE car rolling into NASCAR at Daytona
Originally uploaded by Brande Jackson.
We were very excited to get to kick off our 2006 outreach by joining NASCAR fans at the Daytona races! We were invited by the Dale Earnhardt Foundation, a ONE Campaign partner and supporter, as they wanted us to spread the message of ONE to NASCAR fans. Once again, we rolled out the ONE car, last seen at the N.C. U2 show back in December, and the NASCAR community in turned rolled out to show their support! We signed up lots of new ONE supporters, talked to thousands of NASCAR fans and also got to work with lots and lots of great volunteers, many of whom had never volunteered for ONE before. Special thanks to Dick Baker of the Earnhardt Foundation for his support, and to Jim also of DEI, for giving us the ins and outs of racing culture. I had never really been a fan before, but I have to admit, getting a chance to see the cars blowing by at nearly 200 mph was pretty cool!

Check out our photos from the event!
Posted by Brande at 8:26 PM No comments: